The Society was able to help a local media production company by providing the original Session Minute Book of Aghadowey Presbyterian Church as an information source for a programme on the involvement of the Rev James McGregor in the Migration of 1718.

The 1718 Migration website gives some details about the migration to New England in 1718 of people from the Aghadowey area led by the Rev McGregor.  The Presbyterian Historical Society of Ireland holds the session minute book for Aghadowey congregation, 1702-61, that covers the period when the Rev McGregor was minister of the congregation. 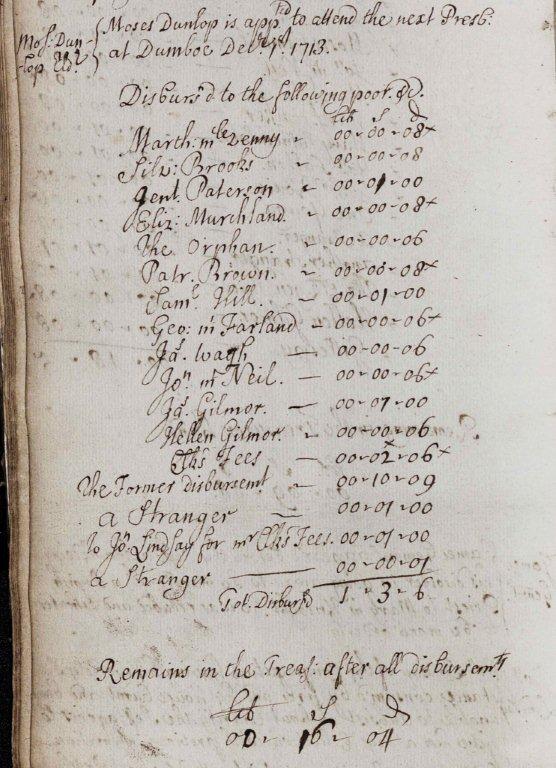 The session minutes reveal the level of poverty in the area as illustrated by the increasing number of named poor people receiving assistance from the church recorded at almost every meeting of session up to and beyond 1718.  This was undoubtedly due to a succession of poor harvests, a downturn in the linen industry and high rents. The congregation struggled continually to support their minister in stipend, corn, a farm and lodgings to the extent that when McGregor left in 1718 he was owed two years stipend amounting to £80.  Clearly, economic conditions played a significant factor in the decision of many to emigrate.

All of this will be covered in a forthcoming major new BBC Northern Ireland television series ‘An Independent People’ when William Crawley will explore the fascinating history of the Presbyterians in Ulster.  The series will re-tell the story of the arrival of the first settlers from Scotland in the 17th century to the present day and will seek to explore what it means to be a Presbyterian in 21st century Northern Ireland.

While most of the series will centre on Ulster it will also uncover the story of how Presbyterianism took root in America by pioneer Presbyterians from Ulster and the global influence of Presbyterians in India.

The Aghadowey session minutes will feature in one of the programmes.

Go to the Presbyterian Historical Society of Ireland website