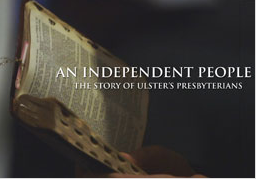 AN INDEPENDENT PEOPLE is a major three part television series exploring the rich history of Presbyterians in Ulster that begins on BBC Two Northern Ireland on Sunday March 10 at 9pm and continues on Sunday 17 and Sunday 24 March also at 9pm.

The series charts Presbyterians’ fascinating and often troubled history uncovering how our faith was planted and took root here in a story that spans four centuries and three continents.

In the first of these hour-long programmes presenter William Crawley follows the development of the Presbyterian faith from its Calvinist origins in Geneva to John Knox and the Covenanters in Scotland and then across the narrow sea to Ulster.

The programme unearths how the faith was planted in a time of war, shifting allegiances and divided loyalties which saw Presbyterians often experience prolonged persecution.

Programme two traces the footsteps of the tens of thousands of Presbyterian families who left Ulster in the 18th Century for the New World.

It uncovers the key role they played in galvanising the fight for civil and religious liberty, which would become the bedrock of American Independence. It also shows how this revolutionary spirit came full circle back to Ulster in the late 18th Century to fan the flames of Presbyterian discontent which would lead to the failed United Irish rebellion of 1798, and usher in the Act of Union.

The final programme in the series features India’s Gujarat Province where communities established by the Irish Presbyterian church in the 19th Century are still thriving to this day.

It also looks at the growing importance of missions at home in the face of the growing industrialisation and urbanisation which saw Belfast become the key manufacturing centre of the Empire.

The growing influence of Evangelicalism is charted and how, in the space of just a century, Presbyterians moved from the political and economic margins of society to the heart of the establishment, with the foundation of Northern Ireland. Along the way the rise of Free Presbyterianism is examined and the future for Presbyterians in an increasingly secular age is considered.