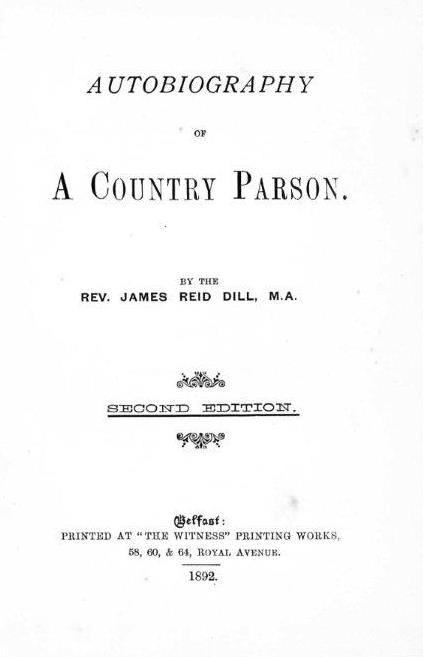 New Acquisition for the PHSI Library

The PHSI library has acquired a copy of the ‘Autobiography of a Country Parson’ by the Rev James Reid Dill, Dromore, Co Tyrone’ (1892).

He was born in 1814 in Springfield, Co Donegal and was brought up by his father as his mother died when he was just 5 years of age. Initially tutored privately by his uncle and cousin he then went to public school at Ramelton which was under the superintendence of the Rev Edward Reid, a brother of the historian, the Rev Dr J Seaton Reid. At the age of 15 he entered Glasgow University and was called to minister in Dromore, Co Tyrone in 1834 at just 21.

This is a most interesting and engaging story of his life and his life-work and covers not only his congregational work but key events of the time including the Union of the General Synod of Ulster and the Secession Synod, the Famine, the 1859 Revival, the Disestablishment of the Church of Ireland, and the First Home Rule Bill.

The Rev Dill retired in 1887 after 53 years in the ministry.