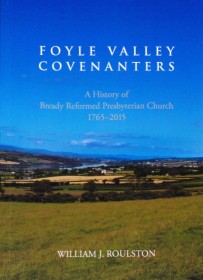 Bready Reformed Presbyterian Church was one of the early Covenanter congregations formed in Ulster in the 18th century. This new book by WillIam Roulston traces the history of Bready Reformed Presbyterian Church, Co Tyrone, from 1765 to 2015 to commemorate the 250th anniversary of the founding of the church. 1765 was when the first minister was ordained but it was six years later before the site at Bready was secured for a meeting house. Since then the members of this small but significant congregation have been active in preserving a Reformed Presbyterian witness in the district as well as contributing to many other aspects of local life.

After a brief introduction giving a concise history of the Covenanters in Ireland, the next chapters in the book cover the events during the period of each of the successive ministers, the life and work of the church and the building of the meeting house. Covenanters have a tradition of political dissent which is dealt with from the point of view of Bready congregation.

Family historians will appreciate an entire chapter on families associated with the congregation.

Very well illustrated, including a colour photograph of a page from a rare Psalm tune book, 1799, that belonged to Elizabeth Stevenson of Gortmellon, the book is priced at £10.00.

It is available in person from the Bready congregation (www.breadyrpc.org/contact.htm) or from the Covenanter Bookshop at Knockbracken. Online purchases can be made through www.booksireland.org.uk. The Presbyterian Historical Society of Ireland has some copies for sale to personal callers to the Library.