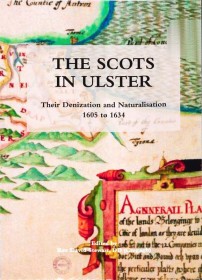 Our latest publication ‘The Scots in Ulster’ is a re-print of 6 pamphlets published by the Rev Dr David Stewart between 1952 and 1957.

The Scots in Ulster Part 1 is about the coming of the Scots to Ulster and the background to the grants of denization and naturalisation given to these Scots settlers to enable them to have the same rights and privileges in Ulster as Englishmen. The original grants found principally in the Irish Chancery Patent Rolls of James 1 and Charles 1 and in the Ulster Inquisitions were lost when the Public Record Office of Ireland in Dublin was destroyed in 1922. Fortunately, the Ulster Inquisitions and the Patent Rolls were published in the 19th century.

Parts 2 and 3 are largely lists of names of those who received such grants, arranged by county – Cos Antrim, Armagh, Cavan and Donegal in Part 1 and Cos Down, Fermanagh, Londonderry and Tyrone in Part 2.

Part 5 is a reprint of a pamphlet in the King’s Collection in the British Library describing the quelling of the 1641 Rising in the North of Ireland.

Part 6, also from manuscripts in the British Library, gives an account of the impact of the Rising on Londonderry city and of the taking of Mountjoy in 1642 by Colonel Clotworthy.

The publication may be bought online from the PHSI.