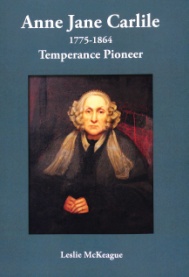 Born Anne Jane Hamill at Rooskey, Co Monaghan, in 1775, she married the Rev Francis Carlile, the minister of 2nd Bailieborough (Urcher) and Corraneary in 1800. Widowed after just 11 years of marriage she was left with 7 children to bring up. She moved first to Londonderry but later settled in Dublin where for the remainder of her days she was active in charitable and philanthropic causes. She soon got involved in prison reform and was visiting prisons in Dublin even before the visit there of Elizabeth Fry. However, it is her pioneering work in temperance that she is most remembered for. She was a frequent speaker throughout Ireland, England and Scotland advocating the setting up of temperance associations and was co-founder of the Band of Hope in Leeds in 1847.

A Blue Plaque placed by the Ulster History Circle was unveiled in May 2015 at Trinity Presbyterian Church, Bailieborough, Co. Cavan in honour of Anne Jane Carlile.

The publication can be obtained from the Presbyterian Historical Society of Ireland at 26 College Green, Belfast, BT7 1LN or ordered on-line.  Buy it now online.