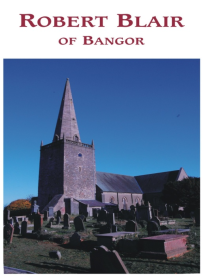 The text of a lecture delivered by Dr John Lockington in 1991 is also included as an introduction to Robert Blair’s autobiography.

Outstanding among the early Presbyterian ministers who shaped the faith and practice of the Presbyterian settlers in Ulster in the 17th century was the Rev Robert Blair. Having been obliged to relinquish his position as a regent in the College of Glasgow and finding it difficult to enter parish ministry because of his non-conformity, he finally accepted an invitation from Sir James Hamilton, Lord Clandeboy, patron of the parish of Bangor, to fill the incumbency. Quickly establishing himself as a leader his counsel and intellectual ability was widely recognised. Early historian Patrick Adair describes him as ‘... the greatest instrument for preaching of the Gospel in the North of Ireland’. The publication of his autobiography helps us to understand the man and the times in which he lived.