A new publication from the PHSI. 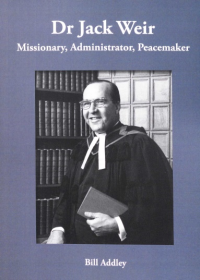 Dr Jack Weir was a towering figure in the Presbyterian Church in Ireland from the 1940s through to the 1980s.  Born in 1919 to missionary parents, Andrew and Margaret Weir, who served in Manchuria in China, he spent his early years in China but returned home at age 12.  Taking a science degree he then followed in his father’s footsteps and became a missionary to China in 1944 where he worked in a number of universities.  The Communist takeover of China forced him to return home in 1950 and soon after he became the minister of Letterkenny Presbyterian Church in County Donegal.

His abilities were soon recognised more widely within the Presbyterian Church in Ireland, becoming Deputy Clerk of the Assembly in 1962 and then Clerk in 1964.  During his time as Clerk he skilfully steered the Church through the controversial debates over its membership of the World Council of Churches, thereby avoiding a schism within the Church, and it was he who drove major reform  of the structures of the central administration of the Church.

However, he is probably best remembered for his involvement in the Feakle talks and the Irish Churches Joint Peace Campaign to bring an end to IRA violence.  Even after his retirement Jack Weir continued in this role of promoting peace and harmony between the two communities in Northern Ireland.

This booklet is an expanded version of a lecture given to the Presbyterian Historical Society of Ireland by the Rev Dr Bill Addley at Bloomfield Presbyterian Church, Belfast, on 19 November 2015.

The publication can be obtained from the Presbyterian Historical Society of Ireland at 26 College Green, Belfast, BT7 1LN or ordered on-line.  Buy now online.