The Presbyterian Orphan Society was founded in 1866 to address the needs of Presbyterian orphans.  It was very much the brainchild of Dr William Johnston of Townsend Street, Belfast, and Dr Wilberforce Arnold, a medical doctor and member of Elmwood Presbyterian Church, Belfast.

Poverty and destitution was rife in Belfast at the time so children were particularly vulnerable.  The Society started with 175 children aided in 1866 and has gone from strength to strength ever since.  In response to the need to reflect the changing circumstances of families and children, the Society changed its name in 1997 to the Presbyterian Orphan and Children’s Society and then in 2016 to the  Presbyterian Children’s Society. 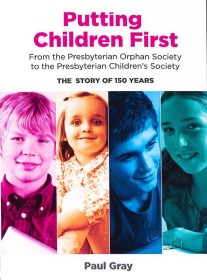 The publication, which commemorates the 150th anniversary of the Society, traces its  origins and growth, the key role played by the Society during the First World War in supporting children who were left fatherless by the death of the main breadwinner, how the Society had to adapt with the introduction of the welfare state, and the support given to the Society over the years by the Presbyterian community.  The examples featured in the publication of very poignant expressions of gratitude from families for the support they received from the Society is testament to the important role of the Society in meeting the needs of the most vulnerable in the community.

This publication can be obtained from the Presbyterian Historical Society of Ireland at Assembly Buildings, Fisherwick Place, Belfast BT1 6DW or ordered on-line.  Buy it now online.