the stories of some of those individuals
who once attended the Mall Presbyterian Church, Armagh
before they marched off to the Great War 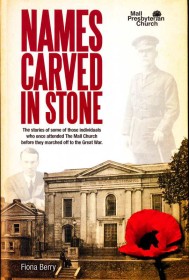 This new publication is a tribute to those from the Mall Presbyterian Church in Armagh who served or died during the First World War and who feature on their war memorials. How fitting that the person who sculpted the memorial tablet was the father of Cecil Walker whose name appears on the Roll of Honour.

After an introduction recording church life and life in Armagh during the First World War that provides the context for the book, there follows brief biographical sketches of each of the soldiers recorded on the war memorials with photographs of the men and of their graves.

The lives of these ordinary men (46 of whom were under the age of 30) who were required to do extraordinary things are brought to life, serving as a permanent reminder of the sacrifice and service of 69 men of the Mall congregation.

The book is a very fine production with many illustrations of documents and other photographs. It is available from the Presbyterian Historical Society of Ireland. Buy it now online.