Languages Of Ulster is a new, three-part series for BBC Northern Ireland television. It explores our region’s unique linguistic traditions – Ulster-Scots, Irish and northern Hiberno English –  and the relationship between them. 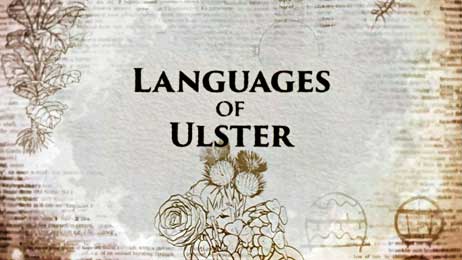 The series begins on BBC Two Northern Ireland on Sunday 12 November at 10.00pm and is built around the Concise Ulster Dictionary, which has been described as “the most comprehensive record of Ulster vernacular speech”.

It tells the story of the Dictionary’s creation and profiles some of the writers whose work captures the vitality and richness of our local speech traditions, including James Fenton, the late Rev WF Marshall from Sixmilecross in County Tyrone, Cecil Frances Alexander and William Carleton.

Languages Of Ulster helps to explain the background and origin of familiar words such as brae, clabber, banshee, kaleyard and dailygan – many of which present challenges for computer spell-checkers. It’s a lyrical and affectionate exploration of language, people and place and an encouragement to find out more about our local speech. It also demonstrates just how much Ulster-Scots words remain part of our everyday speech.

This series will be supported by specially commissioned film and other resource materials from The Open University.

Languages Of Ulster has been made by Below the Radar TV, with assistance from the Northern Ireland Screen’s Ulster-Scots Broadcast Fund.