First Portadown Presbyterian Church has produced a book based on its mission archives, recalling the work of 29 members of the church who have served as missionaries abroad. 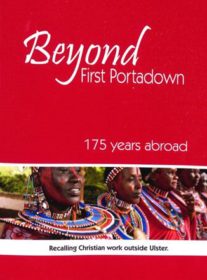 Six of the congregation’s missionaries served with the Overseas Board of the Presbyterian Church in Ireland (PCI) . These included:
Alexander Kerr who was one of the first missionaries sent out by PCI in 1840 shortly after the General Assembly was formed;
Robert Mawhinney who joined the Jungle Tribes Mission in India in 1897;
Anna Graham who served in China with her husband, the Rev Alexander Crawford, from 1902; and more recently,
Brian and Elizabeth Hughes, who worked in Jamaica.

As well as PCI missionaries, the book also covers members of the congregation who served with other missionary societies such as the Africa Inland Mission, WEC International, the Qua Iboe Mission and Sudan United Mission.  The longest recorded service is 50 years with Child Evangelism Fellowship.

Material for the book was sourced from the congregation’s archives as well as material from the Presbyterian Historical Society Library and Archive and local newspapers.

The book should also be read for its coverage of the range of overseas mission work – church planting, agricultural development, children’s work, health care including crisis nursing and speech therapy, teaching, running an orphanage and straight-forward pioneer work.

Beyond First Portadown is available from the Church. Contact the Office at mail@firstportadown.org for details.