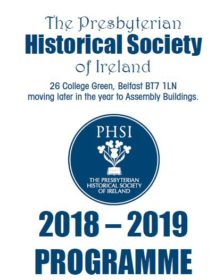 Thursday 21 February 2019
8.00pm Newry Non-Subscribing Presbyterian Church
The Autobiography and Journal of the Rev A G Malcolm, 1785-1823
By the Rev Dr John Nelson
The story of Malcolm’s life and ministerial career with observations on church, life and society in Newry, 1809-23.

Thursday 21 March 2019
7.15pm Annual General Meeting
8.00pm Presbyterian Responses to the Second World War: Challenges and Contexts
By Mr Matthew Houston
An exploration of the interpretations of the war offered by leaders within the Presbyterian Church in Ireland and within their local and wider British contexts.

Thursday 9 May 2019
8.00pm Union Theological College, Belfast
The Robert Allen Lecture - Angels have lost their Way: Presbyterians and rescue and reform work for women in Belfast in the 19th and 20th centuries
By Dr Leonne McCormick, Ulster University Coleraine
An examination the role of the Presbyterian Church and its members in preventative and reform work with prostitutes and women and girls felt to be morally at risk in Belfast and will consider the changing position of women within the city in a period of turbulent change.

Thursday 22 February 2018
8.00pm Cullybackey Reformed Presbyterian Church
To kneel or not to kneel: Presbyterian Reaction to the Five Articles of Perth, 1618
By the Rev Raymond Blair
An examination of King James’ attempt to introduce practices such as kneeling at communion and the observation of Christmas into the liturgy of the Scottish church and the relevance of these disputed issues to church life today.

Thursday 22 March 2018
Glengormley Presbyterian Church
7.15pm  Annual General Meeting
8.00pm The 1718 Emigration from East Londonderry to New England
By Mrs Alison McCaughan
The 1718 emigration was the first organised migration of families (Presbyterian) from Ulster to America.  This talk will examine why the emigrants left, the unpromising land that became their home and the heartbreak for those left behind.

Thursday 19 April 2018
Millisle and Ballycopeland Presbyterian Church
7.30pm Lasting Legacy - a Celebration of the Life and Work of Amy Carmichael
The Presbyterian Church’s official tribute to one of her most notable missionaries, reflecting on her lifetime of missionary service, the on-going work in Dohnavur, and the present-day challenge of slavery.

Thursday 26 April 2018
Welcome Evangelical Church, Cambria Street, Belfast
7.30pm Lasting Legacy - a Celebration of the Life and Work of Amy Carmichael
In the Society’s tribute, we focus on Amy as a young adult in Belfast, her work among women working in the mills (‘The Shawlies’), and the mission she founded in what is now the Welcome Church.

A portrait of Presbyterian ministers in the Province of Ulster - their origins in terms of geographical, social and academic background, their role within the church, how they obtained and spent their income, and their status within the community.

Thursday 22 November 2018
8.00pm Fisherwick Presbyterian Church, Belfast
The Disappearance of George Matthews
By Mr John Larkin, QC, Attorney General for Northern Ireland
An exploration of the fascinating (and murky) intersection of theology, law, personal ambition and greed through an examination of the legal cases involving Presbyterian churches and charities in mid 19th century Ireland in which George Mathews was the prime mover. Mathews was a close associate of Dr Henry Cooke and A.J. Macrory as well as a writer of some skill but he was also, as this talk will explain, an accomplished and ambitious fraudster who used the legal system to advance his interests.