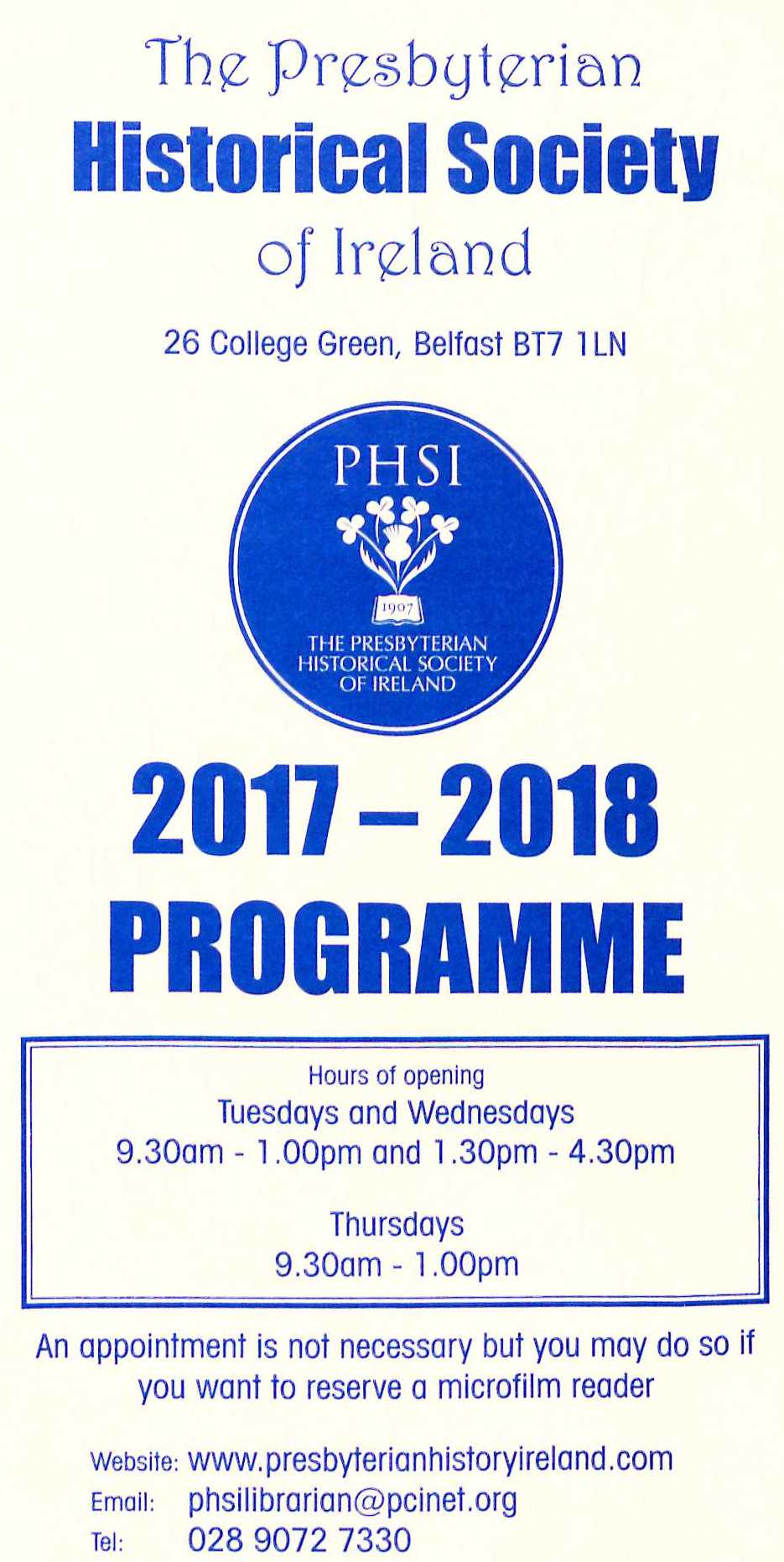 Thursday 23 March 2017
Fitzroy Presbyterian Church, Belfast
7.15pm Annual General Meeting
8.00pm The Original Secession Church in Ireland 1841-1956
By the Very Rev Dr Godfrey Brown
Tracing the beliefs, problems and demise of this group of Seceders who did not join the union of Synods in 1840.

Wednesday 26 April 2017
2.00pm Visit to Culturlann, former Broadway Presbyterian Church, Belfast
with a reflection from Mrs Mildred Poots, a former member, about growing up in the church.

Thursday 4 May 2017
8.00pm Union Theological College, Belfast
The Robert Allen Lecture -
Professor J E Davey and the Heresy Trial, 1927
By Dr Andrew Holmes, Queens's University Belfast
An overview, within a broad cultural, intellectual and theological context, of the heresy trial of J. Ernest Davey, Professor of Church History, Presbyterian College, Belfast, who was accused of being a ‘modernist’.

Thursday 18 May 2017
8.00pm Fitzroy Presbyterian Church, Belfast
Ministering in the Troubles
A discussion and question time with a number of Irish Presbyterians who worked for peace,
Chaired by Mr Will Leitch, BBC

Thursday 12 October 2017
8.00pm 1st Comber Presbyterian Church
The Rev Isaac Nelson - Evangelism, Anti-Slavery and Irish Politics in 19th Century Presbyterianism
By Dr Daniel Ritchie
A consideration of Isaac Nelson's role in advocating the causes of anti-slavery, land reform, and Irish Home Rule within the broader context of 19th-century Presbyterianism. It will demonstrate that Nelson adopted these positions as a result of his commitment to evangelicalism.

Thursday 23 November 2017
8.00pm Knock Presbyterian Church, Belfast
Hunter of Knock: A fresh look at the ministry of the Rev James Hunter within the Presbyterian Church in Ireland.
By the Rev Dr William Addley
Hunter – champion of orthodoxy, but also diligent pastor, liturgical innovator and church planter.

Thursday 22 February 2018
8.00pm Cullybackey Reformed Presbyterian Church
To kneel or not to kneel. Presbyterian Reaction to the Five Articles of Perth, 1618.
By the Rev Raymond Blair
An examination of King James’ attempt to introduce practices such as kneeling at communion and the observation of Christmas into the liturgy of the Scottish church and the relevance of these disputed issues to church life today.

Thursday, 22 March 2018
Glengormley Presbyterian Church
7.15pm  Annual General Meeting
8.00pm The 1718 Emigration from East Londonderry to New England
By Mrs Alison McCaughan
The 1718 emigration was the first organised migration of families (Presbyterian) from Ulster to America.  This talk will examine why the emigrants left, the unpromising land that became their home and the heartbreak for those left behind.

A portrait of Presbyterian ministers in the Province of Ulster - their origins in terms of geographical, social and academic background, their role within the church, how they obtained and spent their income, and their status within the community.