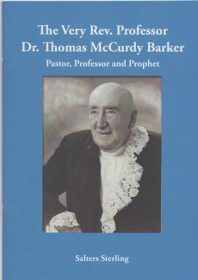 Tom Barker was a Derry man who lived a full life very far away from the Maiden City.

While studying at Magee Theological College he served as one of thirty student stewards at the 1910 World Missionary Conference in Edinburgh.

The year 1913 was a very important one in his life as he was both ordained and married, and later sailed for China where he was to spend nearly forty years in missionary service.

His passion and expertise were in theological education and he served in a number of colleges during his time in China, as well as with the Student Christian Movement at home. He was never happier than in the company of students.

With a number of other missionaries he was a prisoner of the Japanese during the Second World War, and was in Nagasaki when the second Atom bomb was dropped.

Salters Sterling has written a very interesting and informative booklet about a distinguished Missionary and former Moderator of the General Assembly.

This publication (cost £3 plus P&P) can be ordered online from PHSI.