The Presbyterian Historical Society of Ireland
invites you to the launch of
Sketches of the History of Presbyterians in Ireland
by the Rev Dr William Campbell
in the Board Room, Assembly Buildings,
Fisherwick Place, Belfast BT1 6DW
at 2.30pm on Thursday 28th November 2019 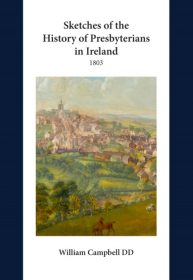 William Campbell was a prominent figure in Irish Presbyterianism during the later years of the 18th century becoming Moderator of the Synod of Ulster in 1773. Born at Newry in 1727 and educated at Glasgow University, he ministered, successively, at Antrim, Armagh and Clonmel, until his death in 1805. It is with the city of Armagh that his name is most closely associated.

Intelligent and well-informed, he was a doughty defender of the ecclesiology and reputation of Irish Presbyterianism against what he termed the "inveterate malice of high churchmen" and suspicions of disloyalty in government circles. He was New Light in theology and did not agree with subscription to "man-made" creeds and confessions. Through his published writings and surviving manuscripts and correspondence we gain an insight into the theological and political movements of the time. His most significant manuscript is "Sketches of the History of Presbyterians in Ireland" published here for the first time and is one of the early accounts of the history of Presbyterianism in Ireland.

This edition includes an Introductory and Biographical Essay by the Very Rev Dr William Donald Patton, currently Chairman of the Presbyterian Historical Society of Ireland.

The cost of the book is £20 plus P&P. It can be bought online through the Society’s Publications Catalogue page.

Special Offer - the A, B, C of Irish Presbyterian History

A True Narrative of the Rise and Progress of the Presbyterian Church in Ireland 1623-1670, by Patrick Adair,
The Autobiography of Robert Blair of Bangor, 1593-1636, by Robert Blair,
Sketches of the History of Presbyterians in Ireland 1803 by William Campbell,
all for just £30 plus P&P.
The Triset can be bought online through the Society’s Publications Catalogue page.