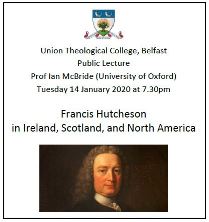 Ian McBride, who grew up in County Armagh, is the Foster Professor of Irish History at the University of Oxford and a fellow of Hertford College. His research interests include the history of Ireland in the Long Eighteenth Century and the history of Northern Ireland since 1920.

This free public lecture will explore the life of Francis Hutcheson in the transatlantic world. Hutcheson (1694-1746), a son of the manse at Drumalig, Co Down, went on to become a leading philosopher of the Scottish Enlightenment, influencing Adam Smith, David Hume, and several of the signers of the Declaration of Independence in Colonial America.