The archives of the Society have been built up gradually over many years through donations and bequests. The Society welcomes donations of archive material of all descriptions which can be presented as a gift or as an indefinite loan to the Society or as a bequest.

They can be divided into a number of different categories: 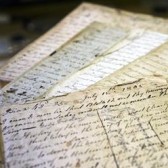 The most important manuscripts are the ‘Adair Narrative’ and Campbell’s History of Presbyterianism along with his journal.

The True Narrative of the Rise and Progress of the Presbyterian Government in the North of Ireland, extending from 1623 to 1670 is the chequered story of Presbyterianism in Ireland written at that time by the Rev Patrick Adair, minister of Cairncastle and then of Belfast. It was first published in 1866 but was re-printed by the Presbyterian Historical Society of Ireland in 2007. Copies are still available for sale.

Sketches of the History of Presbyterianism in Ireland, including a narrative of the Siege of Derry, was written in 1803 by the Rev William Campbell, a leading figure in the Synod of Ulster in the 18th century. His journal documents the negotiations he conducted in Dublin as a commissioner from the Synod of Ulster to petition for an increase in the Regium Donum, a government grant to Presbyterian ministers. The journal also contains letters from distinguished persons in the political world in Dublin.

The Society also possesses a number of illuminated manuscripts that were presented to ministers, often given on the occasion of their marriage or for long service.

As well as holding an almost complete set of microfilms of Presbyterian congregational church records similar to those held by the Public Record Office of Northern Ireland (PRONI), the Society also holds many unique records that can only be accessed in the Society.

Congregational records include registers of baptisms and marriages, session and committee minutes, annual financial reports and communicants‘ registers. Some of the earliest records held are session minutes for Aghadowey Presbyterian Church,1702-61 and baptisms for Cullybackey (Cuningham Memorial) Presbyterian Church,1726-1815.

3. General Assembly, Synod and Presbytery Minutes of the Presbyterian Church in Ireland

The Society holds a set of the printed minutes and reports of the General Assembly of the Presbyterian Church in Ireland from 1840 onwards as well as a copy of the published minutes of the General Synod of Ulster, 1691-1820, and the printed minutes of that Synod from 1821 to 1839. Surviving minutes of some of the Secession Synods and Presbyteries as well as minutes of some of the early General Synod of Ulster Presbyteries are also available for consultation. Please consult the librarian/archivist for details.

Minutes of the Reformed Presbyterian Synod of Ireland,1820-2013 with some gaps, are held by the Society.

Personal papers include diaries, correspondence and sermon notes. For example, the letters and diaries of the Rev Andrew Weir, a Presbyterian missionary who laboured for many years in Manchuria in China from 1899 to 1933. Societies’ records include those of ministers’ associations and the Boys and Girls Auxiliaries.

6. Photographs of Churches and Ministers

Photographs of churches, arranged alphabetically, are a useful source for anyone writing a congregational history while photographs and engravings, usually of the more prominent ministers, are available for consultation.

7. Records Compiled by the Presbyterian Historical Society of Ireland

Of particular interest is the large amount of biographical data available on Irish Presbyterian ministers. While most of this information can be accessed in the printed ‘Fasti’ up to 1910 (a record of the career of ministers) there is additional information held in the manuscript and card index versions and only available in the Society’s library and archive.

Built up over many years the Society maintains files of mainly secondary sources, arranged alphabetically, on congregations in Ireland that can include centenary histories, orders of service for installation of ministers or for the opening or re-opening of a church, newspaper cuttings, photographs of events and short histories.