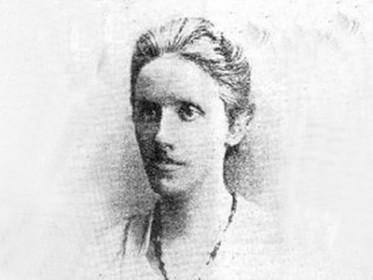 She was one of six children of the Rev William Andrew Russell, minister of 2nd Strabane Presbyterian Church, Co Tyrone. Born in 1868 in Strabane, she attended the Ladies’ Collegiate School, Belfast, and Girton College Cambridge, where she attained honours in the mathematical tripos (degree) examinations in 1889 and was Girton’s top mathematician of her year.

Russell began working at the Astronomer Royal in 1891. She was assigned to work in the solar department under its chief (Edward) Walter Maunder, photographing the sun daily through a telescope, weather permitting; then developing the photographs and examining the images with a measuring micrometer.

Sunspots were of particular interest to the department. Russell witnessed a giant spot in July 1892, and the resulting magnetic storm - a disturbance of the Earth’s magnetic field caused by material emanating from the sun in a manner not fully understood at the time - was recorded on the observatory’s instruments.

Russell also learned about other departments’ work, and made and published observations of eclipses of stars by the moon, and other phenomena.

She joined the British Astronomical Association (BAA), and in 1894 was made editor of its journal, a role she carried out for 35 years.

On 28 December 1895, Russell married her boss, Walter Maunder, a widower, becoming stepmother to five children. She also resigned from her post, presumably because of the bar on married women working in public service at the time. She nevertheless continued to edit the BAA journal and to go on eclipse expeditions, such as the one in India where a total eclipse was visible on 22 January 1898.

One of Annie Maunder’s photos from that expedition showed a bright streamer reaching 10m km into space (14 times the solar radius), and the longest extension of the corona then recorded by any observer. The photograph was widely published in accounts of the eclipse by Walter, but usually under his name.

In August 1905, Annie Maunder took charge of corona photography on the Canadian government’s eclipse expedition to Labrador, the only time her expedition expenses were paid. Unfortunately, the weather was cloudy.

The Maunder name today is mostly associated in astronomy with the ‘butterfly diagram’, a graphical analysis that resembles butterflies of the 11-year sunspot cycle. Walter published the diagram in a paper in 1904, and it was generally attributed to him alone.

It has taken 100 years for Annie Maunder’s part to become known through the efforts of Dr Tom Bogdan of the High Altitude Observatory, Boulder, who had the original drawing restored and its history revealed in 2000.

The Maunders were also interested in a 70-year calm period in the 17th century when sunspots were scarce, first identified by astronomer Gustav Spörer but known today as the ‘Maunder minimum’. The Maunders confirmed that when sunspots are scarce, there are also few if any magnetic disturbances and auroral displays (‘northern lights’).

They also discovered that magnetic storms on Earth recur in 27-day cycles and published a book, The Heavens and their Story, in 1910, with Annie’s name appearing as the first author on the title page.

In 1915, the ban on women in the Royal Astronomical Society was finally lifted, and Annie Maunder was made a fellow, more than 20 years after her name had first been put forward.

After Walter died in 1928, Annie Maunder continued to devote herself to the BAA’s work and to historical research. She died on 15 September 1947, aged 80.

Today, the Maunders are individually commemorated by craters on the moon.