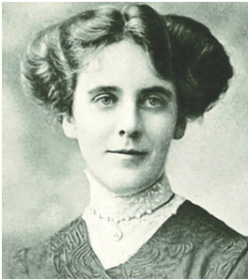 When the Presbyterian Church in Ireland sent Dr Joseph Hunter and Elizabeth Jayne Smith, his wife, to China in 1869 it marked the beginning of a sustained missionary effort in Manchuria.

Between 1869 and 1951 a total of 91 Irish Presbyterian missionaries worked in Manchuria – 31 were ordained ministers, 49 were female and 25 were medically qualified.  They worked closely with missionaries from the United Free Church of Scotland and the Danish Lutheran Church.  Despite many trials and tribulations the efforts of these Irish  Presbyterian missionaries continue to bear fruit to this day.  Today the Christian Church is growing faster in China than anywhere else in the world and there may be as many as 150 million Christians in that country.  Indeed many of the congregations started by Irish Presbyterians are still flourishing with, in some cases, membership numbering several thousand.

One of those missionaries who made a significant difference in China was Isabel Mitchell.   Born in 1879 she was the daughter of the Rev D K Mitchell, the minister of Crumlin Road Presbyterian Church, and his Scottish born wife.  Isabel (Ida to her family) grew up in a home which pre-disposed her to a life devoted to evangelical outreach.  David, her brother, became a minister and served as a chaplain with the 36th Ulster Division during the Great War.  Her sister Janie married a missionary and another sister married a local clergyman.

In 1897, just before she was about to go to university, Ida heard Dr and Mrs Sarah Greig, give a talk about missionary work in that country and of China’s desperate need for women doctors.  (Dr James Greig was an Irish Presbyterian medical missionary who served in Manchuria, China, from 1889 to 1926).  The lecture and  a talk with Mrs Grieg had a profound impact on Ida and inspired her to study medicine and to go to China as a medical missionary.

After a faltering start, Ida graduated from Queen Margaret College, Glasgow (which was affiliated to the University) in July 1903, having won four medals and two prizes during the course of her university career.  Unfortunately, the Russo-Japanese War of 1904-05 delayed her departure to Manchuria but during this period she worked as a house-surgeon in Manchester.  Finally on 12 November 1905 she arrived in Manchuria and was sent to Fakumen where she worked alongside the Rev and Mrs Fred O’Neill and Miss Sara Williams.  She was the first Western doctor in Fakumen, a daunting task for a 26 year old woman, considering the absence of any dispensary, clinic or medicines.

In just over 6 months Ida had opened a dispensary in two little native rooms in the Girls’ School compound and before long it was soon full of patients.  But Ida was not content with this situation and in May 1907 she sought permission to build a hospital.  She was instrumental in getting a new women’s hospital for Fakumen which opened on 16 Oct 1909, free of debt.  Annie O’Neill, a grand-daughter of the Rev Fred O’Neill, described it as ‘the first modern hospital in Fakumen’.  Ida was an excellent doctor and her reputation spread far and wide.

In 1910 she returned home on a year’s furlough but ill-health delayed her planned return. [The Presbyterian Historical Society of Ireland holds her visa issued by the Consul General in Muckden in July 1910 permitting her to travel to London via Siberia]. The exact nature of her illness remains obscure but she underwent an operation in Glasgow in early 1912.  To the surprise of many and to her own delight, she received medical permission to return to China in the autumn of 1912.

Ida possessed an iron will but a frail body. As a child she had not been robust.  Her fragile health may well have been permanently undermined by her strenuous efforts in the years before the Great War.  On 16 March1917 she complained of being tired.  The next day she had a sore throat and was subsequently diagnosed as having diphtheria.  She was expected to make a full recovery but she died on 23 March.  At her funeral service Elder Shang, a local Christian leader said ‘Our doctor has given her life for us.  For twelve years she has been at the call of anyone who suffered.  She was like a man in her strength, and rose at any hour of the night or day to help us.  Her name is known and revered through all this country’.  Elder Shang acknowledged her contribution to the life of the church and expressed their sorrow at her passing but observed that ‘ her work was done and as a grain of wheat must fall into the ground and die, so she who did so much by her life, will do even more by her death, and we must bow to God’s will’.  Ida was buried at Kirin, the home of her sister Janie who was married to the Rev James McWhiter, another Irish Presbyterian missionary whose home church was also Crumlin Road and who served in China from 1908 to 1945.

Ida’s letters home to her mother and her poetry are preserved in an edited collection along with her life story by the Rev Fred O’Neill entitled ‘Dr Isabel Mitchell of Manchuria’ (James Clark & Co, London, 1917).

Ida Mitchell was not the only female  Irish Presbyterian missionary to die in in the service of Christ in Manchuria.  Miss Ruth Dickson who grew up in Eglish congregation and was matron of the Mission Hospital in Newchang died of fever and malnutrition on 24 December 1944 in a Japanese internment camp.  Dr Annie Gillespie who grew up in Sandys Street congregation in Newry and went to China to assist her brother, the Rev William Gillespie at Kwangchengtzu, in December 1896 but died of dysentery just eight months later on 5 July 1897.

This is an edited version of an article by Gordon Lucy to whom we are most grateful for permission to use.

Further Reading:  Dr Isabel Mitchell of Manchuria edited by the Rev F W S O’Neill (London 1917)
(A copy is available for consultation in the Presbyterian Historical Society Library and Archive)