Originally published in the
Eighth Annual Report of the Presbyterian Historical Society of Ireland, 1914-15.

THE subject of early Belfast printing is one that does not, it is to be feared, receive the attention it merits. It has more claim on Presbyterians from the fact that the early Belfast printers, Neill, the Blows, Joys, and others belonged to their communion. And the works produced were for the most part religious. Another interesting point that receives but scant consideration among us is the question of the earliest printed Irish Bible or Testament. To Patrick Neill, the Belfast printer and bookseller, is attributed the issue of a New Testament about 1700, no copy of which has yet been seen, but it was advertised in one of Neill’s books of the year 1700.

A very interesting discovery has just been made. Dr. Crone, Editor of the Irish Book Lover, recently procured a copy of Craghead’s “Advice for Assurance of Salvation”, printed by Neill in 1702. The binder of this copy, who was probably the printer, used as “end papers” waste sheets of a New Testament which experts pronounce to have been printed with the same type as was used in other works issued by Neill about that time.  It is therefore concluded that these “end papers” are a portion of the New Testament advertised by Neill in 1700, no copy of which is yet known. By the courtesy of Dr. Crone we are able to present a facsimile of the type of this New Testament, in the hope that readers will make an effort to bring to light a copy of it. It is most probable such a copy may be preserved in some of our Presbyterian homesteads. Ministers have special opportunities of making inquiries with a view to unearthing a copy, and their help is invited. 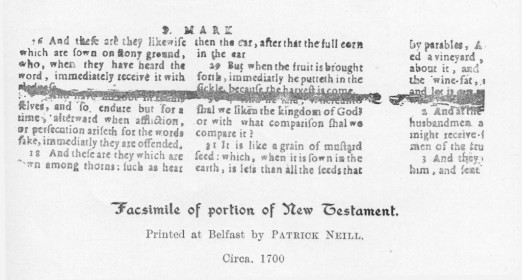 James Blow, Neill’s successor in the printing business, re-issued some of the works published by his predecessor, e.g., a neat little psalm book; and the tradition is probably well founded that he printed a Bible about 1714, known as the “Sin On More” Bible, from a misprint in some of the copies printed off before the error was discovered. Nor is any copy of this Bible forthcoming. Curiously enough, the writer has a Blow printed book—“The Doctrine of the Bible Justified, &c.”, 1715—the front “end paper” of which is believed to be a portion of a waste-sheet of this “Sin On More” Bible, which antedates by nearly forty years the earliest existing Belfast Bible. It is very desirable that copies, no matter in what condition, be unearthed, so as to confirm to Belfast the honour of having been the first place in Ireland to publish a Bible.