The year 2015 marked the 150th anniversary of the opening of Magee College in Londonderry, named after its co-founder, Martha Maria Magee (nee Stewart).

The original Magee Presbyterian College was opened on 10 October 1865 under the terms of the will of Mrs Magee of Dublin, the widow of a Presbyterian minister.  Co-founder of Magee College, Londonderry, Martha Maria Magee, nee Stewart, was born in Lurgan, Co Armagh about 1755.  She was the daughter of Mr Robert Stewart, a member of a prominent Lurgan family.  In 1780 she married the Rev William Magee who was ordained in First Lurgan Presbyterian Church in the same year.  Her husband died on 9 July 1800 leaving her and her two sons in straightened financial circumstances and dependent on the Presbyterian Widow’s Fund.  Both her sons followed a military career but both died young, one of whom died from contracting rabies while serving in India.

Mrs Magee’s had two brothers, Colonel Stewart and General Stewart, who also followed successful military careers, both of them serving in India with the East India Company.  During their career they amassed a considerable fortune which their mother inherited on their death.  Suddenly Mrs Magee’s financial position changed for the better. She moved to Dublin but rather can keep her newly acquired inheritance for herself she liberally gave it away to a range of Presbyterian causes. When she died in June 1846 a number of Presbyterian charities benefited from her bequest - the Irish Presbyterian Mission to India received £25,000, the Foreign Mission was given £5,000, Usher’s Quay Female Orphan’s School in Dublin received £5,000 and the new Presbyterian Church of Ormond Quay, Dublin, received £1,350.

However, it was her endowment of £20,000 to establish and endow a theological college in Ireland for the training of Presbyterian ministers that she is better remembered for.  There followed nearly 20 years of controversy before the College was finally opened.

Under the terms of Mrs Magee’s will, very extensive powers with regard to her College bequest were vested in Trustees that she had appointed – the Rev John Brown of Aghadowey, James Gibson, a Dublin barrister and the Rev Richard Dill of Ushers’s Quay, Dublin.  Under the terms of the will, arts and theology were to be combined and the trustees were given discretion as to where the college should be sited.  The General Assembly of the Presbyterian Church in Ireland had already been considering in the early 1840s the establishment of a College for arts and theology which was then complicated by the establishment in 1849 of Queen’s College, Belfast, seen by many as a rival to those who supported a Presbyterian College which would include an arts department.  It was highly unlikely that Government was going to give an endowment for 2 colleges in Belfast with an arts department but they might consider a complete college if it was sited elsewhere.

Many years of wrangling followed and after protracted litigation it was decreed that arts and theology should be combined in the one college and that this college should be established in Londonderry.  With the additional financial support from the bequest in the Rev Richard Dill’s will, and support from the city’s commercial sector such as the McCorkell Shipping Line as well as the Honourable the Irish Society, Magee College was finally opened on 10 Oct 1865 with the Rev Dr Wilson of Limerick, Moderator of the General Assembly for the year, presiding along with the Mayor of Londonderry.  Designed in the Gothic style by the Dublin architect, A. P. Gribben, and built of Scottish sandstone Magee College is one of the outstanding buildings in Londonderry. 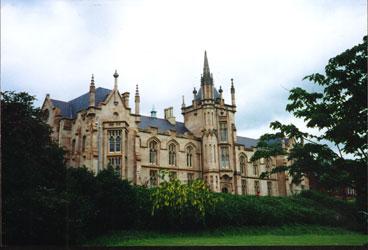 Arrangements were made for the appointment of 7 professors, five of them being clergymen - the Rev Samuel Dill, Professor of Theology, the Rev Thomas Witherow, Professor of Church History and Pastoral Theology, the Rev Richard Smyth, Professor Oriental Literature and Hermeneutics, the Rev J Thoburn McGaw, Professor of Logic, Belles Lettres and Rhetoric and the Rev Henry McKee, Professor of Latin and Greek.  The two lay professors were John Park, Professor of Metaphysics and Ethics, and John R  Leebody, Professor of Mathematics and Natural Philosophy.  All were able to subscribe to the Westminster Confession of Faith.  26 students enrolled for the first year, 16 of whom subsequently were ordained into the Presbyterian ministry either at home or abroad.

Magee always seemed to be dogged by non-recognition and controversy.  It failed to obtain University recognition in 1866 and though recognised in 1881 by the Royal University of Ireland, Magee could not offer degrees so students graduated through the Royal University.  Then in 1906 when the Irish university structure was re-organised that brought into existence the new Queen’s University of Belfast and the National University of Ireland colleges in Dublin, Galway and Cork, Magee was left out.  Magee didn’t join either of these new institutions and instead formed a relationship with Trinity College Dublin whereby Magee students could complete their degrees at Trinity as graduates of the University of Dublin.  It was not until 1938 and after changes had been made to the governance of the College that the Parliament of Northern Ireland agreed to provide an annual grant of £2,500 for the College’s Arts departments.

The Collegiad or Will of Widow Magee by Rev James Fleming

To mark the 150th anniversary the pamphlet Magee University College produced just before the 90th anniversary of the College's foundation is available to view.

The History of Magee: Past and Present by Professor T G Fraser (2015)