In 1844 the congregation of Ballinasloe was organised, largely through the efforts of Rev. John Edmonds, who had been appointed to the itinerating department of the General Assembly's Home Mission. Soon after this, a church and manse were erected. Considerable delay took place in procuring a suitable site, as the Earl of Clancarty was most unwilling to afford facilities for the erection in his town of what he called a ‘Separatist’ place of worship.  But the members of the infant congregation were firm and resolute, and they succeeded at last in obtaining a valuable and suitable site. The contractor unfortunately failed when the walls were ready for the roof, but a member of the congregation, the late Mr. James Campbell, J.P., of Galway - then a young man - lent £200 to put on the roof.  A minister was called, but difficulties arose about his ordination, and he went to America.  The congregation dwindled away during the time of the famine until scarce a fraction of it remained.

At length, on the earnest solicitation of Dr. Edgar, the present minister, Rev. James W. Whigham, was induced to come and ‘try to raise the fallen tabernacle in Ballinasloe’.  Mr. Whigham had early shown a missionary spirit, and had been invited by Dr. Morgan, the first Convener of our Foreign Mission, to go as missionary to India.  But he had concluded that he was better fitted for work at home.  He was ordained at Ballinasloe in November 1851.  It was then the day of small things in that now flourishing Western congregation.

His call was signed by six persons.  But under his faithful ministry, and with an increase of Scotch and North of Ireland residents in the neighbourhood, the work grew and prospered. The church had to be enlarged by the addition of the manse, which was previously a separate part of the same building, and the present commodious manse was built a little outside the town.  This enterprise, which cost £1,146, was finished without a penny of debt - all giving and all working - in the year 1860.

Dr. Whigham was successively Convener of the Continental Mission, the Church Extension Mission, and of the Sustentation Fund.  He was Moderator of the General Assembly in the year 1885-1886.  He is author of the Presbyterian Map of Ireland, an ornamental map on which the Presbyterian congregations and mission stations all over Ireland are marked in red, with a picturesque border containing historic scenes in Presbyterian history and much interesting information. He received the degree of D.D. in 1888 from the Irish Presbyterian Theological Faculty.

From ‘ A History of Presbyterianism in Dublin and the South and West of Ireland’ by Clarke H. Irwin’. 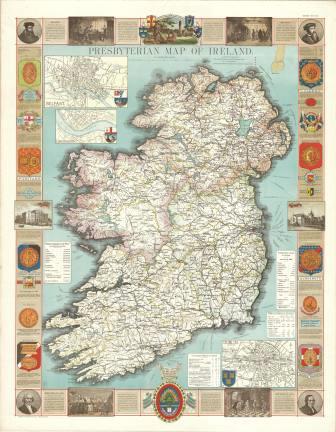