Another Presbyterian recipient of the Victoria Cross, the highest and most prestigious award for gallantry, was Robert Morrow, a member of Carland Presbyterian Church, Co. Tyrone. Born on 7 September 1891 to Hugh and Margaret Jane Morrow (nee McKnight) on a farm in Sessia, near Newmills, he was left fatherless at an early age which probably explains why the family had to seek support from the Presbyterian Orphan Society. 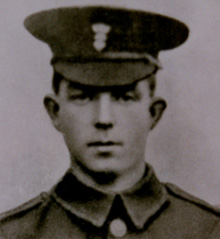 Robert enlisted with the 1st Battalion of the Royal Irish Fusiliers in 1912 before the First World War began but on the outbreak of war he was posted to France with the British Expeditionary Force. A young man of remarkable courage his captain commanding his company described him as ‘a man absolutely devoid of fear’ though he was quiet and small of stature. On 12 April 1915 near Messines in Belgium and in the face of heavy enemy fire which had left the trenches badly damaged, Robert Morrow, on his own initiative and over a period of two hours or more, rescued and carried to a place of relative safety six men who had been buried in the debris of the trenches.
However, a fortnight later while engaged in a similar act of heroism on 25 April he was badly injured and died the following day at the age of 24. For his acts of bravery on both occasions he was awarded the Victoria Cross which was presented by King George V to his mother at Buckingham Palace. He also had the Medal of St George conferred on him by the Emperor of Russia.

His Victoria Cross can be seen at the Royal Irish Fusiliers Museum in Armagh. 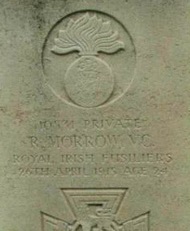 and his name is recorded on the War Memorial in Carland Presbyterian Church.