Among the Ulstermen who were awarded the Victoria Cross was William Frederick McFadzean, a member of Newtownbreda Presbyterian Church.  He was born 9 October 1895 in Lurgan, the eldest son of William McFadzean, a linen yarn salesman who had been born in Dundalk, Co Louth, and Anne Pedlow Bowden.  Baptised in 1st Lurgan Presbyterian Church on 19 Jan 1896, he was the eldest of the family with 3 younger brothers – Jack Bowden, Robert James and Henry Bowden – and a sister, Mary Gordon.  The family moved to Jocelyn Gardens, Belfast and then to the Cregagh area of Belfast.

Following his education at Mountpottinger National School and then Belfast Trade Preparatory School he was successful in obtaining a position as a clerk in the well -known linen firm of Spence, Bryson & Co, Great Victoria Street in Belfast.  A tall, athletic figure he was an enthusiastic member of Collegians Rugby Club and the Young Citizen Volunteers set up in 1912 and which soon got caught up with the ant-Home Rule movement and was eventually merged with the Ulster Volunteer Force.  With the outbreak of World War 1 in 1914 it was perhaps no surprise that William McFadzean enlisted as a Private with the 14th battalion of the Royal Irish Rifles and was despatched to France on 5 October 1915.  In a letter home he wrote ‘You people at home make me quite proud when you tell me I am the soldier boy of the McFadzean's.  I hope to play the game and if I don't add much lustre to it, I certainly will not tarnish it’.  His height and physique marked him out as suitable for a ‘grenadier’ or a ‘bomber’, a role that was to lead to his death early on in the war.

The allied offensive against the German positions on the Somme near Thiepval Wood in which the 36th Ulster Division distinguished itself, began on 1 July 1916.  McFadzen was preparing his ammunition which came packed in boxes but as he did so one of the boxes slipped into the trench and two of the grenades fell out and lost their pins.  Immediately realising that the grenades would explode within seconds and that his comrades were in grave danger, with heroic courage McFadzean threw himself on top of the bombs.  Taking almost the full force of the blast he was blown to pieces but all the men were saved and only one other soldier was injured.  Although his comrades laid his body aside in the hope that he would receive a decent burial later, William has no known grave and is commemorated on the Thiepval Memorial to the Missing, Pier and Face 15A and 15 B and his name is inscribed at the Ulster Memorial Tower nearby, a monument commemorating those from Ulster who died on 1July 1916.  A memorial tablet dedicated to William McFadzean was unveiled in Newtownbreda Presbyterian Church in 1917 and there is a similar memorial to him in 1st Lurgan Presbyterian Church.

King George V presented Private McFadzean’s Victoria Cross (VC), the highest and most prestigious award for gallantry in the face of enemy action, to his father William at Buckingham Palace on 28 February 1917.  The record of his VC citation in the London Gazette reads -‘He well knew his danger, being himself a bomber, but without a moment’s hesitation he gave his life for his comrades’.  He was only 20 years of age when he died.  His Victoria Cross can be seen on display at the Royal Ulster Rifles Museum in Belfast. 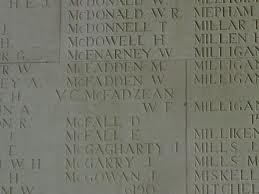 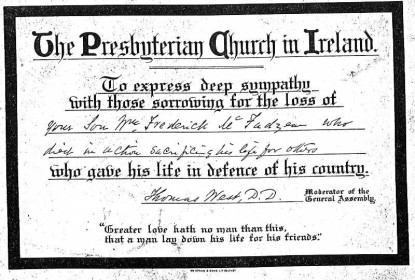 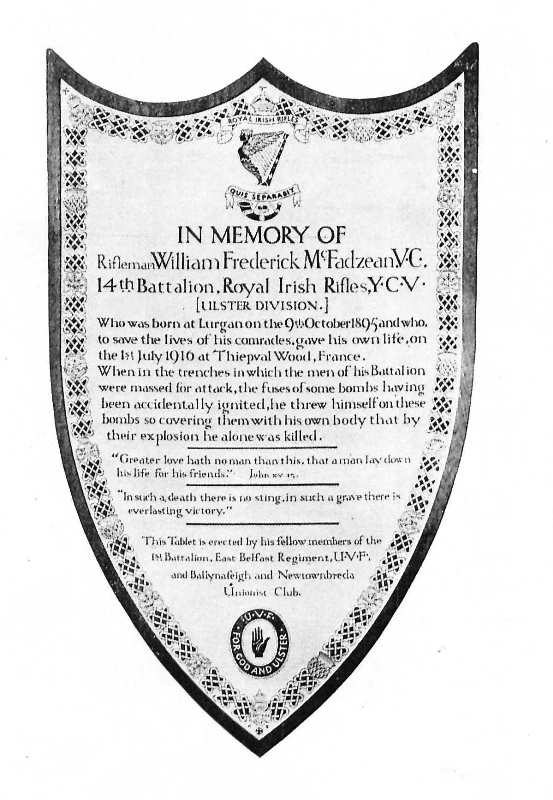 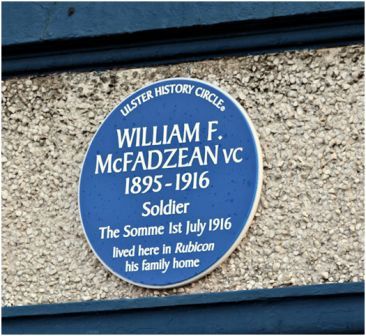 The Blue Plaque placed by the Ulster History  Circle at the former home of William McFadzean, 'Rubicon', Cregagh Road, Belfast.