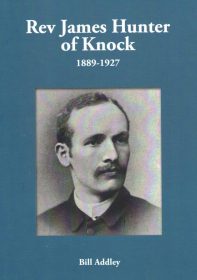 James Hunter, following a short ministry in First Newry, exercised a ministry of thirty seven years in Knock, east Belfast.
While he is remembered as a man of strong character and principles, and a staunch defender of the orthodox evangelical Christian faith, he was also a very hard worker and helped build his congregation into a very large one during his long ministry.

A man of great compassion, he could sometimes be difficult to work with. He had a heart for the needs of ordinary working people and began another outreach in east Belfast that grew to become a separate Presbyterian congregation.

While he was a conservative in theology, for his day he was quite radical in his approach to some aspects of worship.

Dr Bill Addley brings the story of this largely forgotten Irish Presbyterian minister to life in this highly readable booklet.

He concludes his account in this way: “. . .  he gave of himself without limit to further what he considered would best advance the Kingdom of God, and the price he paid was very great in terms of his health and personal finances. He endured isolation, ridicule and unpopularity without complaint for the noble cause he sought to advance".